A proposed land swap in the San Bernardino National Forest would relocate part of the Pacific Coast Trail to create an alternative recycling center and end illegal recycling in the region.

A bill by Rep. Paul Cook, R-Yucca Valley, authorizes the exchange of 73 acres of federal land for 71 acres of San Bernardino County land in the northeast section of the forest. The trade would allow Big Bear Disposal, Inc. to build a recycling plant that local contractors could use to recycle construction materials.

The bill, now pending before the U.S. Senate, also requires the relocation of part of the Pacific Crest Trail, which runs through the federal land, prior to the exchange.

At least one group that advocates for environmental policies that protect the trail approves of the potential deal.

“We’ve come to an agreement on making sure that the community gets the facility that it needs, but making sure that the trail is fully protected in the process,” said Mark Larabee, associate director of communications and marketing for the Pacific Crest Trail Association.

The Pacific Crest Trail, which is designated as a National Scenic Trail, spans more than 2,600 miles from Mexico to Canada, touching California, Oregon and Washington.

The proposed land swap wouldn’t mark the first time the trail has been rerouted, Larabee said. However, he added, other adjustments have been initiated by the Trail Association as a way to make it better for users.

“Most of the time the reroutes are to make sure the trail is in the best place it can be to provide the best experience that it can be,” Larabee said. “We’ve taken the trail off forest roads and put it on the crest, so it’s out in the beautiful landscape rather than walking on a dirt road.”

The Pacific Coast Trail Association’s approval of the proposed land swap is contingent upon the disposal company paying for any necessary environmental reviews and the relocation of the trail, which could be a multi-year process, Larabee said.

“There still has to be a lot of work done to make sure the trail is protected and that the new location is sustainable,” Larabee said.

“But we’re working together to make sure that happens properly.”

If signed by the president, San Bernardino County would try to negotiate a long-term lease with Big Bear Disposal, which would be responsible for building and operating the facility, said county spokesman David Wert.

The facility, which would be built near the Big Bear Transfer Station on Holcomb Valley Road, has long been needed in the valley, where illegal recycling has grown over the past 20 years or so, said Michael Perry, a consultant for Big Bear Disposal, a private disposal company that serves Big Bear Lake.

Local contractors have been recycling wood, concrete, asphalt, metal and other construction materials on properties throughout the valley, often in violation of zoning laws. The activity has an adverse effect on the environment and neighbors through potential groundwater contamination, dust and noise, Perry said.

“Frankly, they have nowhere else to go right now,” Perry said. “We’re trying to get them a solution.”

Hauling the materials — south, to facilities in San Bernardino, or north in the High Desert — also is costly for the contractors, Perry said.

“The cost to drive this material all the way down there, and pay somebody to dispose of it, is not feasible,”  Perry said. “That’s why they end up doing it here, locally. And that’s why we had this grow up here over the last, I’d say, 20 years.”

The legislation also could help address a safety concern.

Truckers hauling trees down the mountain typically travel through a narrow, winding pass, to a processing facility in the valley, leading to traffic congestion and multiple accidents, according to Cook’s office.

The facility would be further away from unincorporated Big Bear City and closer to where the trees are actually processed, according to Cook’s office.

“I’ve worked closely with our local governments to ensure this land exchange is done correctly and that all the stakeholders have their concerns resolved,” Cook wrote in a prepared statement. “This will alleviate traffic and make mountain roads in the area safer. I look forward to this bill becoming law.” 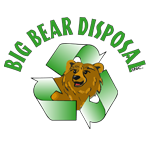